Competing at an invitational for the first time in nearly 2 years, the Dolphin harriers returned in style, running under the lights on the links of Brookside Country Club at the Cool Breeze Invitational.

With a small crew of 10 athletes, the girls kicked off their 2021 campaign in the featured race of the night, the “Sundown Showdown.” Competing against a loaded field, the young Lady Dolphins rose to the occasion with a 6th place team finish. Paced by junior Allura Markow with a solid 17:26.6 minute run over the three mile course, the Dolphins then saw sophomores Cooper Murphy (18:11.7) and Paige Scheer (18:20.7), freshman Annie Ivarsson (18:41.0), and sophomore Tessa Anderson (18:42.2) round out the scoring five. Lifetime PRs were also turned in by a handful of the other racing crew that included Angie Lopez, Quinci Lott, Mia Alcantara, Avery Higgins, and Dani Freedberg.

The boys team finished off the night in the final race of the evening, the boys’ edition of the “Sundown Showdown.” With four of their returning varsity runners unable to compete, the Dolphin Men rose to the occasion and represented their team well. Led at the front by junior Jack Jones (16:01.2) and sophomore Garrett Woodruff (16:11.8), the Dolphins also got great runs from junior Derrick Grassman (16:37.6), sophomore Mike Ayala (16:38.8), and freshman Evan Noonan (16:41.1). Michael Mooney, Liam Lott, Josh Chernekoff, and Ethan Britton also competed well under the bright lights.

All in all a great kick off to the season! Full results can be found here. 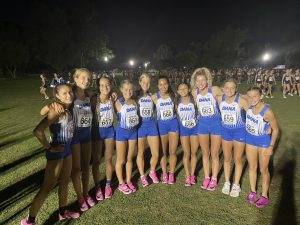