Boys are OC Champions on all levels!

The Boys are The Orange County Champions on ALL LEVELS! And have 5 consecutive OC Titles on the varsity level.

“Dana Hills sophomore Jai Dawson turned in a strong race and finished second to Grover in 14:42, while Dolphins senior teammate Carrick Denker edged Capistrano Valley senior Sean Robertson (14:44.2-14:44.3) for third place.
(Denker’s thrilling third place result came at the cost of a decent amount of blood loss, as he was inadvertently cut deeply on his left hand by a piece of metal coming around a curve during the second half of the race.
Dolphins head coach Craig Dunn confirmed that Denker was treated for the gash with 11 stiches at a local area hospital, but was well enough to re-join his teammates for the awards celebration later in the afternoon and is expected to resume training soon.)
The battle for team supremacy was once again little more than another yearly affirmation that Dana Hills, the county’s reigning symbol of unrelenting supremacy, is still in a stratosphere of its’ own when it comes to competing against its local area peers.
Buoyed by Dawson and Denker, senior Omar Garcia (15:13), junior Brandon Pizano (15:14), and junior Ryan Broadhead (15:16) closed out a Dolphins’ quintet that scored in the top 22 and produced a 64-126 victory over second place Beckman.
Dana Hills extended its county record streak of team titles to five in a row (nine of the last 13 overall) and added to its county record of 11team titles overall in meet history.” 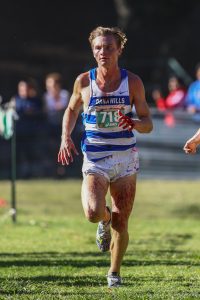 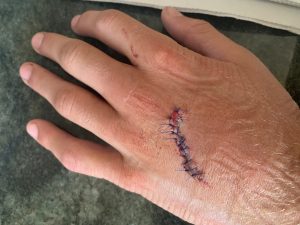 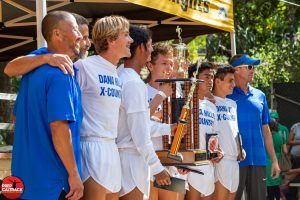